RiskAPI
Time to Manage Your Risk

As winter approaches in the northern hemisphere, the potential for outsized moves in global natural gas markets increases. These can take place due to either unexpected cooling or warming periods which may significantly affect consumer demand and produce large changes in natural gas prices.

In general, price dynamics in natural gas markets are uniquely challenging for portfolio and risk managers. This is partly because of the difficulty in forecasting weather but also since natural gas volatility tends to increase quite dramatically as actively trading futures contracts become "prompt" (i.e., as they approach their delivery dates). The historical returns for a given contract may be well-behaved and adhere to expected volatility estimates throughout the contract's trading life. However, as the delivery date of the contract approaches and it becomes prompt, volatility tends to explode higher, rendering any historical-data driven analysis quite unpredictive and falling well short of correctly estimating the magnitude of future returns.

This effect on volatility is demonstrated quite well by the behavior of the most recent front contract for the NYMEX Henry Hub Natural Gas future. Henry Hub Natural Gas is a monthly futures contract that expires in the final trading days prior to each delivery month. There are 12 contracts that trade for each calendar year, each with its own delivery date at or near contract expiry. This highly liquid contract trades several years out into the future, providing a very efficient price discovery, speculation, and hedging mechanism for the US natural gas markets. The December 2020 future, for example, was the prompt contract during the entire month of November 2020: 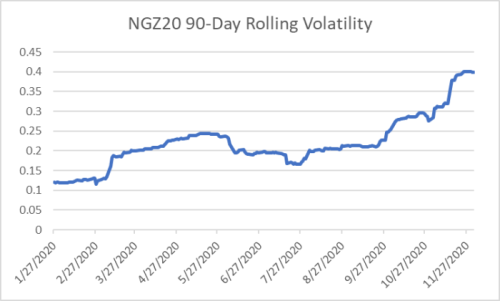 As can be seen above, the realized volatility of this contract remains fairly range-bound for most of the calendar year 2020. However, as the contract approaches the prompt month (expiration at the end of November), we see an effective doubling of volatility, from 21% in September to almost 40% by contract expiration on November 25th, 2020. Applying a statistical estimate such as Value at Risk (VaR) to this contract's data would vastly underestimate exposure prior to the prompt period. The problem mainly arises from the desire to include more data in a given statistical analysis, yet when included, this data has the effect of underestimating future exposure since it mostly contains returns observations from a vastly lower risk regime (i.e. all the historical returns preceding the prompt period).

The effect is greatly pronounced when looking at VaR during the prompt month itself, specifically during two dates: November 3rd and November 16th. Two commonly used VaR models, Parametric (also known as delta-normal) and Historical Simulation, both vastly underestimate actual return magnitudes on both of these days:

The RiskAPI system provides a simple format for converting any futures contract to use this volatility sampling and normalization process in order to seamlessly adjust historical returns. For the December 2020 Henry Hub Natural Gas contract, symbol: NGZ20, a symbol modification is applied by adding a hash sign to this code: NGZ20#. This prompts the system to modify the historical returns of this contract by normalizing historical return observations to present day volatility conditions using past and present volatility measurements.

Using the RiskAPI Add-In, which provides a simple keyword-based mechanism to quickly generate VaR in Excel via the RiskAPI cloud service, we reproduce the same calculations, this time on the VAF version of the Henry Hub contract, NGZ20#:

The result is a much better-performing estimate of losses, using only data preceding each outsized return event:

Additional manipulations of returns are available, allowing users to take advantage of filtered, seasonal samples, i.e., constructing a set of normalized returns sampled from specific months out of each year, going back several years (a full whitepaper of this methodology exists for registered and trial users of the system).

In Part I of this series, we explored the ability to calculate portfolio factor sensitivities using the RiskAPI Add-In. In Part II, we will look at the application of a multi-factor portfolio stress test using the same principles.

Using the Stress-Testing feature of the RiskAPI Add-In, we can set up a multi-factor stress test, applying shocks of varying magnitudes and directions to each factor of interest. The system will evaluate the simultaneous effects of such a shock scenario both on each individual component as well as the portfolio as a whole.

As in Part I, we continue to leverage the "Market Macro" keywords-based feature of the Add-In to quickly generate RiskAPI calculations on portfolio and factor symbols and quantities. The above image shows the output of a multi-factor stress test performed on all 103 Nasdaq 100 components against the same factors used in Part I. These are presented again here:

The "Index" and "Index Stress" keywords allow us to specify which set of factors the stress test is being run with, as well as the magnitudes of the shocks applied to each factor. The "Stress Type" keyword defines, via the entry "Index MR", that a multi-factor stress test is being performed (also available are single-factor, underlying prices, implied volatility, and other types). The Index MR stress testing method leverages the system's multiple regression capability to calculate the portfolio's factor sensitivities over the data set and factors specified. It then applies the individual user-defined factor shock values in the process of evaluating the multi-factor shock scenario.

For the stress test in question, the large one-day changes in value experienced on March 16th, 2020 are used. These ranged from -12% in the SPX to as high as 14.6% in the SIZE factor. The system returns three pieces of information as outputs of the scenario:

The same process can be applied to a less intuitive portfolio, leveraging the options valuation capabilities of the system:

Here we see the same multi-factor scenario applied to a present-day "costless-collar" options strategy on AAPL shares. The system automatically performs the factor sensitivity analysis, shock-propagation, and options valuation required to evaluate such a scenario on the option portfolio in question.

Factor analysis of equity portfolios represents a significant portion of the equity investment sector. The ability to measure and decompose portfolio factor exposure is key to this group.

In addition to multi-model VaR and Stress-Testing, Factor analysis is also available in the RiskAPI Add-In. Using the system's exposure analysis functionality, generating factor sensitivities is both simple and fast. In this post we will examine a factor analysis process using a portfolio composed of all 102 Nasdaq 100 components against a collection of popular US Equity factors:

The above image shows the output of the "Multiple Regression" keyword via the RiskAPI Add-In's "Market Macro" feature. This feature allows users to quickly generate API calculations by simply entering in a table with the appropriate column headings. For simplicity, this example uses the S&P 500 index, as well as 5 "off-the-shelf" factor index equity ETF's:

The "Coefficients" row, generated by the Add-In, represents the OLS regression beta coefficients of the portfolio vs. all of the included factor symbols under the "Index" keyword. The regression is run using YTD daily data, as specified by the "start date" and "end date" keywords. Weekly and Monthly periodicities are also available via the Add-In, including rolling versions of all of the above.

An important detail produced alongside the beta coefficients is the row labeled "T-stats", indicating how significant the regression coefficients are. Values further away from zero suggest more valid beta coefficients. From the results above, we can see that this Nasdaq 100 portfolio has a beta of 1.88, nearly twice the S&P 500. What's more, the t-stat is quite high, at 13.73, telling us this is a beta that is quite valid. This is not a surprise given the existence of many SPX components in the Nasdaq 100, such as AAPL, MSFT, and AMZN.

In contrast, the momentum factor has a low t-stat of 0.94, suggesting that the low beta coefficient of 0.05 is both not explanatory or statistically significant. The "Multiple Regression" feature also produces several other metrics to help the practitioner gain insight in the validity of all factors used as well as the underlying data the analysis was run on.

In the next post in this series, we will examine how the RiskAPI system's factor exposure analysis capability can be utilized to execute multi-factor stress-testing and scenario analysis.

Take a closer look at the RiskAPI system in action. Contact us to arrange a live demo and a free trial:

Enter the words shown above separated by space

Sign up to try out the RiskAPI Add-In Service. Execute live calculations on positions and portfolios. Free Trial